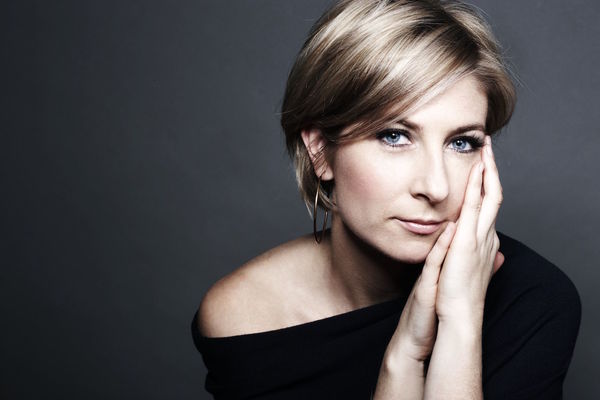 The Department of Music and the Program in Sacred Music were thrilled to announce last year the appointment of Kiera Duffy to the position of Associate Professor in the Practice, and SPF. Ms. Duffy will take up her new duties in January, 2017, teaching undergraduates in the Department and also joining Professor Stephen Lancaster, Head of the Graduate Studio, in her work with the Program in Sacred Music.  Professor Duffy visited the campus at the opening of the school year. It was wonderful to catch up with her and get some of her thoughts about her teaching and her career.  Here are a few quotations from our interview.

What excites you about teaching?
Duffy:  Having just gotten back from a few days of teaching at Notre Dame, I must say EVERYTHING! In general, I love the energy of the university environment, which is of course fueled by the students. I love the passion and sense of possibility in the students at Notre Dame, and of course, their seemingly insatiable intellectual curiosity. All of this makes my soul sing!

How do you think of the process of learning?
Duffy: I really love the process of learning how to do it. Having one's instrument inside one's body presents specific challenges, and the mastery of this can sometimes elude us. However, when one begins to discover how to negotiate the delicate dance of muscular and aerodynamic coordination required for singing, I dare say it's one of the most satisfying experiences a person can have. I cannot wait to help my students discover that for themselves.

Where were you trained?  Teachers who helped you on your way? School of hard knocks? Link to the opera auditions film?Who are some of the people who helped you along the way?
Duffy: I studied at Westminster Choir College as an undergrad which provided a small, nurturing environment, albeit one that cultivated sophisticated musicianship and artistry. I began studying with Laura Brooks Rice at Westminster Choir College in 1997 and would go on to work with her for another 14 years. Professor Rice built my voice from the ground up. Another invaluable influence, also at Westminster, was Joseph Flummerfelt, whom Leonard Bernstein called the greatest choral conductor in the world (and I would have to agree). His lessons inform my musical life every day. Unlike many professional instrumentalists, most singers continue to study with a private teacher well into their professional lives, and I am no exception. Today I work with Professor Edith Bers in New York City, who is on the voice faculty of the Juilliard School. I am blown away by her "desert fox" ears. Working with the professional singer is in some ways different from working with students, and Edee intuitively understands that dynamic. She knows when it's appropriate to really hone in on a technical concept, and when it's not...aka three days before you have to do a recording for Deutsche Grammophon!

What are some of the most difficult experiences you have had as young professional?
Duffy: I think I could be the principal of the Hard Knocks Academy! I did the Met Auditions 5 times (!) before advancing beyond the regional level and ultimately getting to the finals. At one of my earlier forays, I was told by one of the judges (who is one of the major administrators in the opera world) that my "voice just wasn't that special...yet." Of course, I didn't hear the "yet" part. The first part of the sentence was devastating enough. I certainly shed some tears then, and many other times, but ultimately I have discovered that I am quite resilient. From where that comes I am not certain. But it is essential in this career as it is in most things.

What are your most recent performances? Recordings? Future offerings?
Duffy:

World Premiere of Breaking the Waves by Missy Mazzoli at Opera Philadelphia and the Prototype Festival in NYC--so excited about this!J.S. Bach,  Mass in B-minor with Boston Baroque and David Daniels

Those following Kiera Duffy’s work will also enjoy her cameo role in Susan Froemke’s documentary film The Audition (2009) shot at the Met in 2007.  Professor Duffy gave an insightful interview on the experience for the Arts Journal blog, and her words will resonate beautifully in the ears of the singers she will teach at Notre Dame: “the emotion that you see when I walk off the stage after the finals performance, while naturally fueled by the incredible adrenaline rush that comes with singing on the Met stage for the first time, was in many ways more due to the fact that I had, at least for those two weeks, conquered my demons. Big money or no big money, I had won the prize.”

As students and colleagues at Notre Dame: we have won the prize!