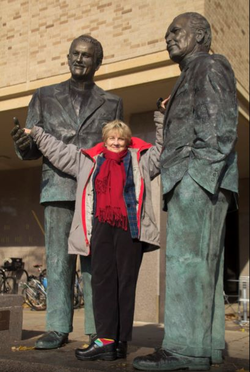 Margot Fassler had a book and three articles appear in academic year 2017-18. The book, Medieval Cantors and Their Craft: Music, Liturgy, and the Shaping of History (800-1500), an edited volume with Katie Bugyis and Andrew Kraebel (York, 2017), contains essays by both junior and senior scholars and grew out of a conference in Notre Dame’s London Global Gateway. The volume has been published electronically on JSTOR as well as in print. Peer-reviewed published essays by Fassler in this same period are “Images and Chants for a Digital Model of the Cosmos,” in the Journal of the Alamire Foundation 9/1 (2017): 161-178; “The Victorines and the Medieval Liturgy,” in A Companion to the Abbey of St. Victor, ed. Hugh Feiss and Juliet Mousseau, (Brill, 2017), 389-421; and “Shaping the Historical Dunstan: Many Lives and a Musical Office,” in Medieval Cantors and Their Craft (York, 2017), 125-150. Her work (with Christian Jara) on a digital recreation of the cosmos, using artwork, music and theological themes from oeuvre of the nun Hildegard of Bingen (1098-1179) has been the subject of numerous presentations throughout the academic year, including a showing of Act I of the model in the Boston Science Museum and at the Harrison Planetarium in London. Fassler gave several keynote addresses last year, including at conferences in Reichenau, Germany, and at Villanova University.

Fassler was president of the Medieval Academy of America in 2017-18, and gave her presidential address at the annual meeting in Atlanta in March, 2018. Her recent documentary film (with Christian Jara) Where the Hudson Meets the Nile: Teaching Coptic Chant in Jersey City can be viewed on YouTube, and will soon be released on Folkstreams.net. Fassler was involved as an external advisor of the project Sound Memories, and served in this capacity in a conference held in Utrecht in late May, 2018. From the project website:  “Our project explores the mechanisms by which Europeans of a distant past (c. 1200-1600) used collective musical memory to shape cultural and political behaviour. Specifically, this research project asks in which ways are these mechanisms relevant to the societies of 21st-century Europe?”

Margot Fassler teaches graduate seminars in the medieval liturgy, and in worship and music in the USA.