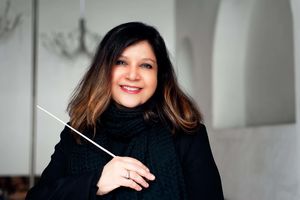 Professor Carmen-Helena Téllez’s active year, which included a semester’s sabbatical in the Spring, gave her time to engage in several professional activities. In the Fall, 2017, she conducted Mendelssohn’s Elijah for the Bogota International Sacred Music Festival, and gave the lecture "Authority on the Conducting Podium: The Case of Women Conductors" at a conference at the University of Cambridge:“The Gendered Lectern: Performing Authority” (organized by the Center for Research in the Arts, the Social Sciences, and the Humanities).

In the Spring, 2018, Professor Téllez consulted with the University of Chile about a new specialization in Choral Conducting within the Master of Music Performance; conducted her own interdisciplinary concept for Mozart’s Requiem, for the Quito International Sacred Music Festival, produced by the Teatro Nacional Sucre of Ecuador; presented a paper on composer Arvo Pärt at Nanovic Institute’s conference,“1968 in Europe and Latin America;” and spoke at the University of California-Riverside on “New Modes of Presentation for Classical Music: The Challenges for the Conductor as an Interdisciplinary Artist.”

In June, 2018, she was in residence at the Teatro Nacional Sucre of Ecuador, to workshop and conduct eight performances of Mozart’s The Magic Flute, in her own transcription for an orchestra of Andean Instruments —titled La Flauta Mágica de los Andes— with libretto in Spanish by the theater's artistic director Chia Patiño. In July, she presented a peer-reviewed paper at the international conference of the Performance Studies Network, held in Oslo, Norway, on the integration of methodologies from the field of Performance Studies to the training of conductors.

Professor Tellez offers lessons to second year MSMs and to DMAs in choral conducting, as well as secondary lessons, teaches Choral Literature 2, and is Professor of Record for Concordia, SMND's graduate recital choir.