'Three Candles that Illume Every Darkness'
Singing, Hospitality and the Sacred Stranger 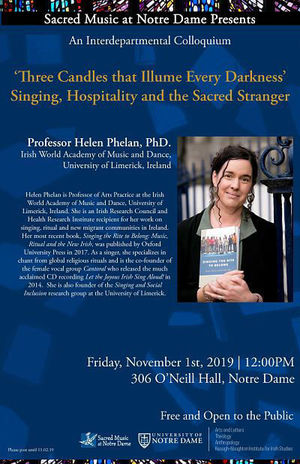 The concept of ‘the sacred stranger’ in contemporary philosophical and theological discourse is especially relevant in today’s world of unprecedented human migration. The performance of hospitality is noted as a key aspect of any meaningful encounter with ‘the other’. This paper explores the proposal that singing has unique properties that make it especially suitable to fostering such experiences.

The first part of the paper draws on the work of Kristeva, Derrida, Kearney and Caputo, among others, to examine these contemporary re-imaginings of the sacred ‘after’ God and ‘after’ secularism and the erosion of the theistic / atheistic divide. This manifests through a deepening engagement with artistry and performativity, creating somatically grounded, culturally specific, expressions of the sacred.

The second part turns to the potential role of singing in this performance of the sacred, introducing a threefold model of sonic encounter. Drawing on historical examples of triadic wisdom traditions from Judeo-Christian scripture to Irish medieval literature, it suggests a triangulation of context, content and intent, to explore contemporary experiences of ritual singing against the backdrop of migration, challenging any easy divisions between the religious and the secular in their creation of sacred space.

The final section anchors the paper in a case-study of a Congolese-Irish choir.

Elikya was established by a group of asylum seekers in Limerick, Ireland, in 2001. Drawing on over a decade and a half of ethnographic interviews, it tracks the musical life of this choir and concludes with the proposal that Elikya performs sonic hospitality and creates opportunities for encounters with the sacred stranger through its singing.

Helen Phelan is Professor of Arts Practice at the Irish World Academy of Music and Dance, University of Limerick, Ireland. She is an Irish Research Council and Health Research Institute recipient for her work on singing, ritual and new migrant communities in Ireland. Her most recent book, Singing the Rite to Belong: Music, Ritual and the New Irish, was published by Oxford University Press in 2017. As a singer, she specializes in chant from global religious rituals and is the co-founder of the female vocal group Cantoral who released the much acclaimed CD recording Let the Joyous Irish Sing Aloud! in 2014.  She is also founder of the Singing and Social Inclusion research group at the University of Limerick.

This lecture is made possible by the generous contributions of:
Department of Theology
Department of Anthropology
Keough-Naughton Institute for Irish Studies