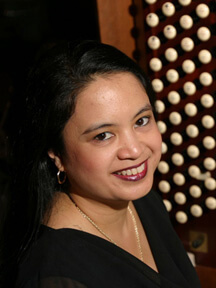 Dr. Pascual, Director of Music and Organist at St. Patrick’s Cathedral, NYC, describes her work as the head of a large program in a major Roman Catholic Center. How does she find room for the treasures of  the past in the Church of the present? "Serving the Faithful at St. Patrick's Cathedral and in the Archdiocese of New York Through Music."

Dr. Jennifer Pascual was appointed Director of Music at St. Patrick’s Cathedral in New York City in 2003, the first woman to hold this prestigious liturgical music position. Jennifer earned a Doctor of Musical Arts Degree in Organ Performance from the Eastman School of Music in Rochester, NY where she studied with David Higgs. She holds a Master of Music Degree in Piano Performance from the Mannes College of Music and received the Bachelor of Music Degrees in Piano and Organ Performance and Music Education from Jacksonville University in Florida. She has served as an organist and choir director in the Dioceses of St. Augustine, FL and Rochester, NY, and the Archdioceses of Newark, NJ and New York City, NY, and has served at three Roman Catholic Cathedrals. From 2007 to 2014, Dr. Pascual was professor and Director of Music at St. Joseph’s Seminary in New York. She currently also serves as the Director of Music of the New York Archdiocesan Festival Chorale.

Dr. Pascual has been a member of and has served on the boards of several organizations pertaining to sacred music. She is a frequent recitalist, clinician and adjudicator at national conventions. She was a finalist in the Florida First Coast Piano Competition, participated in the Bach Aria Festival in New York, the International Bamboo Organ Festival in Manila, the Christmas International Festival in Moscow, the Semana Internacional de Órgano in Madrid, the Mariacki Festiwal Organowy in Krakow, the Międzynarodowego Festiwal Muzyki Organowej w Oliwie in Gdansk, the Terra Sancta Organ Festival in Israel and Palestine, and the Semaine de l’Orgue International Pipe Organ Festival in Lebanon. Dr. Pascual is a recipient of the Paderewski Medal and Theodore Presser and Paul Creston awards. Jennifer has performed as an organist and conductor in Austria, Belgium, Canada, Ireland, Israel, Italy, Jordan, Lebanon, Palestine, the Philippines, Poland, Russia, Spain and the United States.