The lecture series "Creative Sacred Music " hosted by the Conducting Studio of Sacred Music at Notre Dame, with support from a Henkels Grant, invites you to a lecture by major American composer Leonardo Balada.

Leonardo Balada is the Professor of Composition Emeritus and former Chair of Composition at Carnegie Mellon  University. In that role he has been the teacher of some of the most active composers in the US today.  Professor Balada has been concerned with large topics in history and social justice.  He will lecture on "Las Moradas": Constructing the Large Scale Work on Religious Topics." This session will include an open seminar where students in the Sacred Music Program at Notre Dame will show their plans for large scale compositions. He will be the subject of a portrait concert performed by Ensemble Concept/21 at Indiana University South Bend. 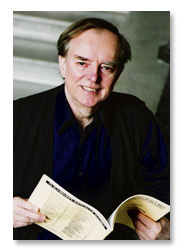