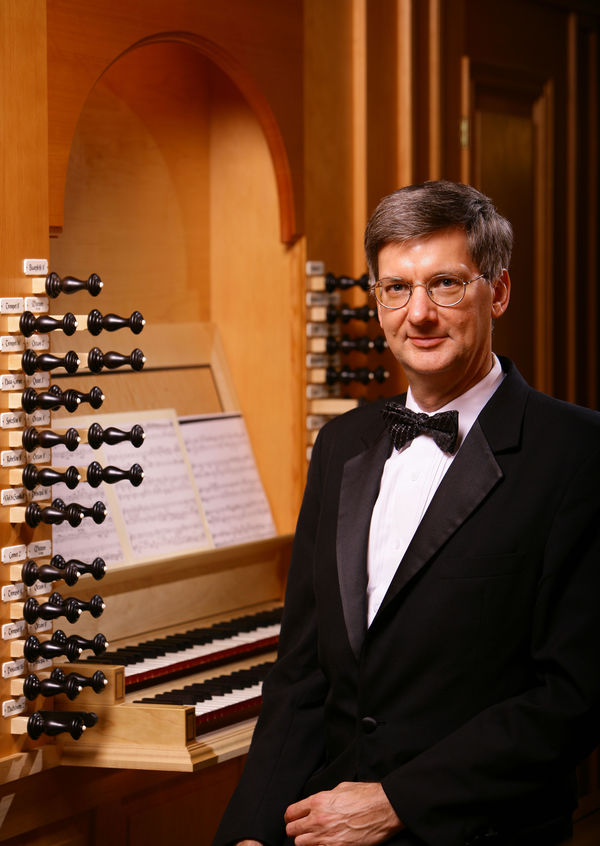 In Boston on June 24 at Old South Church, members of the American Guild of Organists swarmed to hear a recital by a featured performer at the Guild's National Meeting: Notre Dame's Professor of Organ, Dr. Craig Cramer.  Cramer, known as a specialist in baroque repertory and a master of the mechanical-action organ, was about to play the 1921 Skinner organ, an instrument that has been much restored, and that once served for the Ordway Civic Theater in St. Paul, Minnesota.   It has 115 ranks and 7,625 pipes, and people were curious to see what Cramer would make of his assigned partner.

The program opened quietly with  "Le Mystère de Noël," by Auguste Fauchard (1881-1957), a work with seven movements, each of which is based on the medieval Christmas hymn “Jesu Redemptor omnium.”  As Cramer played, audience members were delighted to notice that each of musical vignettes seemed to correspond to the scenes depicted in the magnificent Christmas window by Clayton and Bell just above the organ console.  Cramer assured those who asked him about it later that this was a serendipitous coincidence, but whatever the case both the musician and the artists showed themselves to be powerful storytellers.

The balanced program also included the "Introduction, Scherzo and Fugue on B-E-A-T-E" (1993) by contemporary composer Toni Zahnbrecher, the director of music and organist at the Church of St. Willibald in Munich-Laim, Germany, and the Prelude and Fugue on “O Traurigkeit, O Herzeleid” by  Ethel Smyth (1841-1924), a composer whose works Cramer has championed for some years.  Max Reger's Second Sonata, Op. 60, a monumental work in three movements, served as the grand finale.  Although a work well known to the audience, many were astounded at Cramer's choice of colors; he transformed the familiar into something unexpected and new.
One critic was overheard to say at the end of the recital that Cramer wrestled the gigantic Skinner organ of Old South Church to the ground with his superb artistry and consummate skill.  Who would have expected that this renowned devotee of the Baroque organ and its music would show himself to be the master of a large electro-pneumatic organ with a program of nineteenth and twentieth century works?  Yet this is what happened, and at the end the audience of connoisseurs leapt to its feet with thunderous applause.
- contributed by Margot Fassler